Manage dotfiles and any git directories interactively with fzf

dotbare is a command line utility to help manage dotfiles and or as a generic fuzzy git client. As a dotfile management tool, it wraps around git bare repository, query git information from it and display them through fzf for an interactive experience. It is originally inspired by forgit, a git wrapper using fzf. dotbare uses a different implementation approach and focuses on managing and interacting with system dotfiles. Because of the flexible implementation of dotbare, it can easily integrate with symlink/GNU stow setup or even as a generic fuzzy git client to use in any git repository.

You could find out how git bare repository could be used for managing dotfiles here. Or a video explanation that helped me to get started. If you are currently using a symlink/GNU stow setup, checkout how to integrate dotbare with them here. 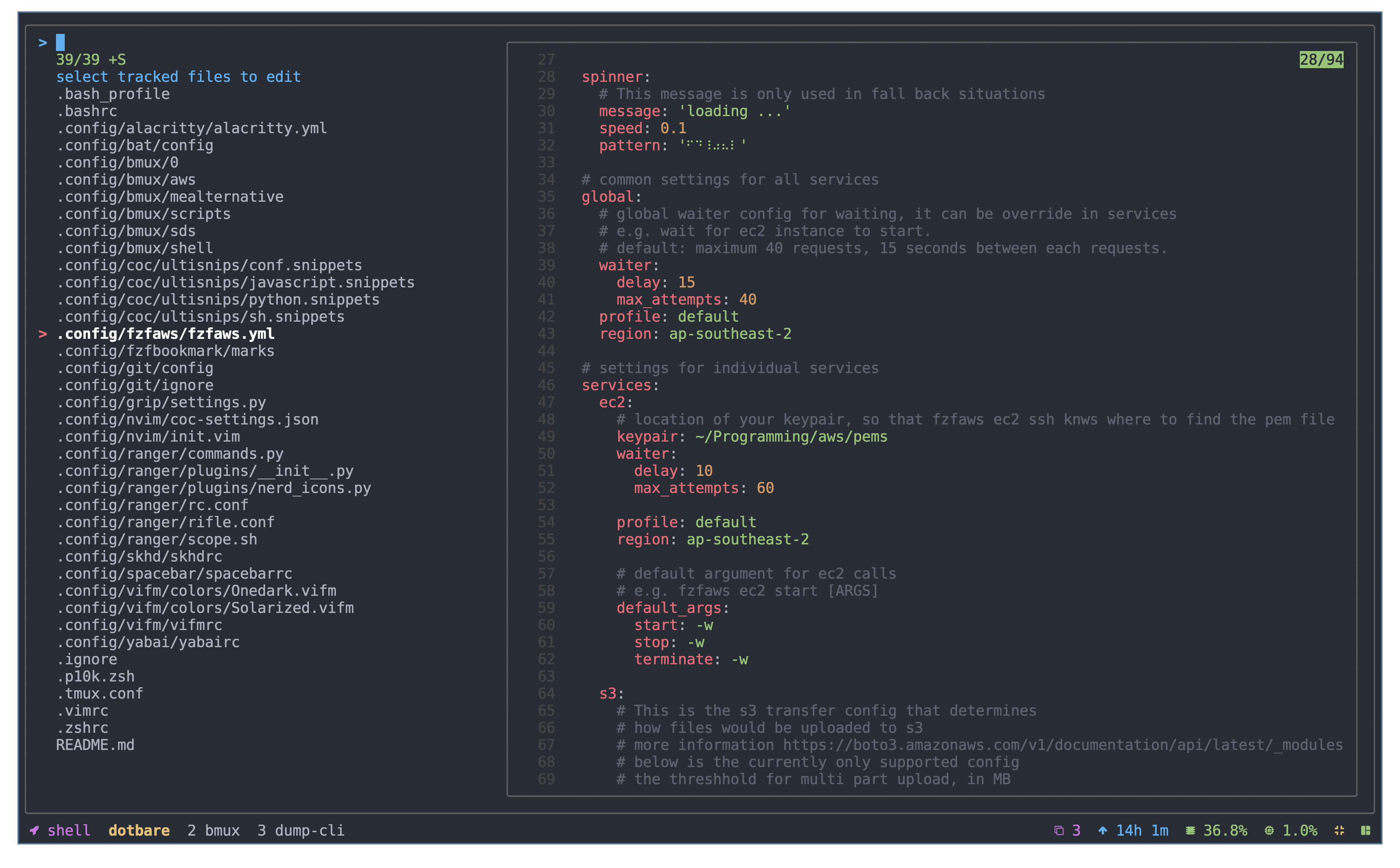 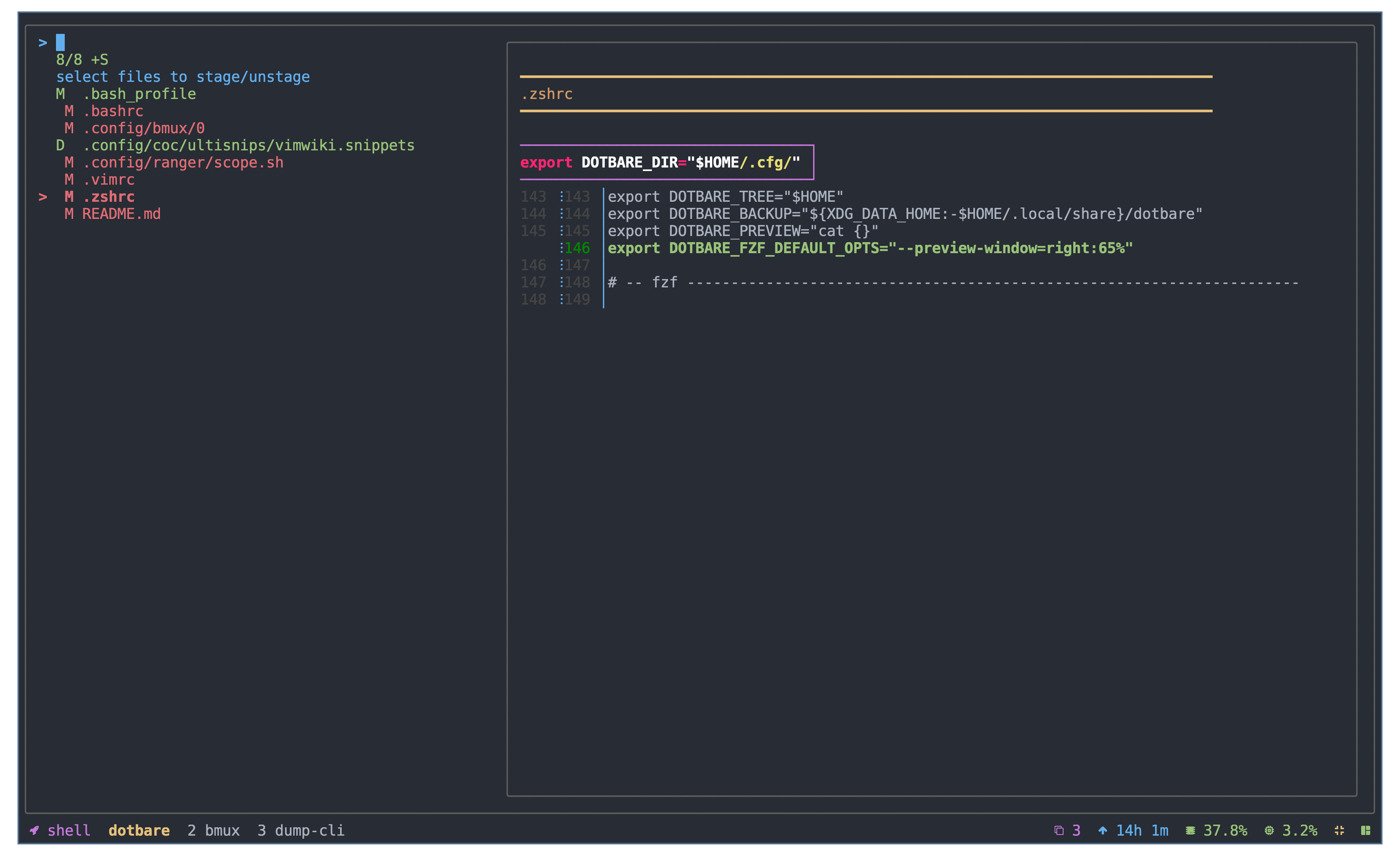 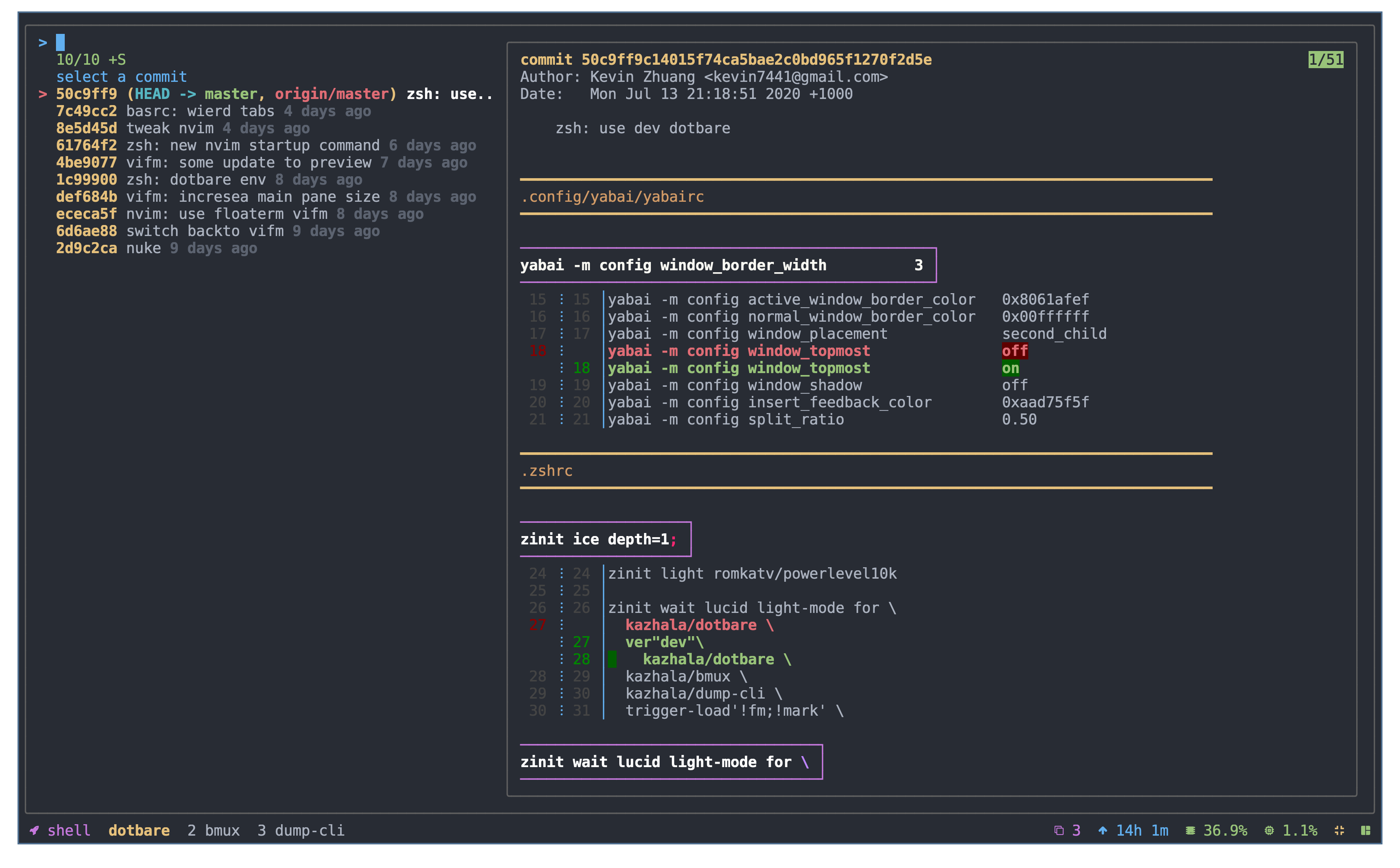 It has always been a struggle for me to get started with managing dotfiles using version control, as tools like "GNU stow" really scares me off with all the symlinks, until I found out about using git bare repository for managing dotfiles, zero symlinks, minimal setup required while keeping dotfiles at the location they should be.

However, it has always lack some interactive experience as it does not provide any auto completion on git commands nor file paths by default. It is also a pain when migrating the setup over to another system as you will have to manually resolve all the git checkout issues.

dotbare solves the above problems by providing a series of scripts starts with a prefix f (e.g. dotbare fadd, dotbare flog etc) that will enable a interactive experience by processing all the git information and display it through fzf. In addition, dotbare also comes with command line completion that you could choose to either to complete git commands or dotbare commands. dotbare also comes with the ability to integrate with GNU stow or any symlink set up as long as you are using git. It is easy to migrate to any system with minimal set up required. In addition, with a simple flag --git, you can now also use dotbare as a generic fuzzy git client to manage any git repository.

dotbare should work with any zsh plugin manager, below is only demonstration. Checkout wiki about how to enable completion for zsh.

dotbare comes with a dotbare.plugin.bash which contains the command line completion function for both git and dotbare, checkout wiki about how to enable it.

Or you could create a alias which point to dotbare executable.

You will need git on the system for obvious reasons..and because dotbare is written in bash, it will require you to have bash in the system (You don't need to run bash, just need to be in the system).

Migrating from a generic symlink setup or GNU stow

Note: with this method, you do not run dotbare finit -u [URL] when migrating to new system, you will do your normal migration steps and then do the above steps.

While bare method is great and easy, I recommend keeping your current symlink/GNU stow setup and integrate it with dotbare instead of a migration. If you are really happy with dotbare, as long as your remote repository resembles the structure of your home holder (reference what I mean in my repo), simply run the command below.

Disclaimer: I have not done nearly enough test on this as I don't personally use symlink/GNU stow setup, migrate this way with caution. I recommend you test this migration in docker, see Test-it-in-docker.

Migrating dotbare to a new system

Test it in docker

When you are about to do migrations, I strongly suggest you give the migration a try in docker first. The dotbare image is based on alpine linux.

dotbare could be customized through modification of env variables.

Note: customization of fzf is not covered here, checkout their wiki.

This is the location of the bare repository, dotbare will look for this directory and query git information or it will create this directory when initializing dotbare. Change this to location or rename the directory to your liking.

If you are using symlink/GNU stow setup, set this variable point to the .git folder within your dotfile directory.

This is the working tree for the git bare repository, meaning this is where the version control will take place. I don't recommend changing this one unless ALL of your config file is in something like \$XDGCONFIGHOME. If you are using symlink/GNU stow setup, set this variable to point to the folder containing all of your dotfiles.

This variable is used to determine where to store the backup of your files. It is used mainly by dotbare fbackup which will back up all of your tracked dotfiles into this location. It is also used by dotbare finit -u [URL], when there is checkout conflict, dotbare will automatically backup conflicted files to this location.

This is probably already set in your ENV. dotbare uses this variable to determine which editor to use when running dotbare fedit.

This variable set default keybinds for fzf in dotbare. You could checkout a list of keybinds to set here.

Customize fzf settings for dotbare. This is useful when you want a different fzf behavior from your normal system fzf settings.

This variable controls the diff output pager in previews like dotbare flog, dotbare fadd etc. It will read the value of git config core.pager to determine the pager to use. If you have a specific preference for dotbare or have not set the global pager in git config, you could use this variable to customize the diff preview.

All usage and commands are documented in wiki.

Latest changes are documented in CHANGELOG.

Not all functions have 100% coverage and lots of user interaction cannot be effectively tested, please fire up issues if something went wrong.

I've added AWSCodeBuild to CI/CD to build the docker image. It is mainly for my personal practice. If you are interested in what's happening in AWSCodeBuild you could checkout my cloudformation template.

Checkout out CONTRIBUTING.md to see how you could contribute to dotbare. PRs are welcome and I'm happy to improve/extend dotbare's functionality.

Don't forget to leave a star :)

dotbare was initially part of my personal scripts, I had a hard time sharing those scripts and as the number of scripts grows, I feel like is more appropriate to make a dedicated project for it. I hope you find it useful and enjoy it, thanks!

You could find some more demo here